Please fill in this form and we will respond to you.


The weak anion exchange high-performance liquid chromatography (WAX-HPLC) provides glycan charge profiles. Negatively charged glycans often play a critical role in the function of a glycoprotein. Glycan charges are usually due to sialic acids, however they can also result from sulphation or phosphorylation of monosaccharide building blocks. Biopharmaceuticals often contain two main types of sialic acid; N-acetyl-neuraminic acid (Neu5Ac) and N-glycolyl-neuraminic acid (Neu5Gc). Neu5Ac is found in both human and non-human cells, whereas Neu5Gc is not present on human glycoproteins. The biopharmaceuticals efficacy, serum half-life and immunogenicity are impacted by both the abundance and the type of sialylation. Consequently, sialylation is a glycosylation critical quality attribute (GCQA). 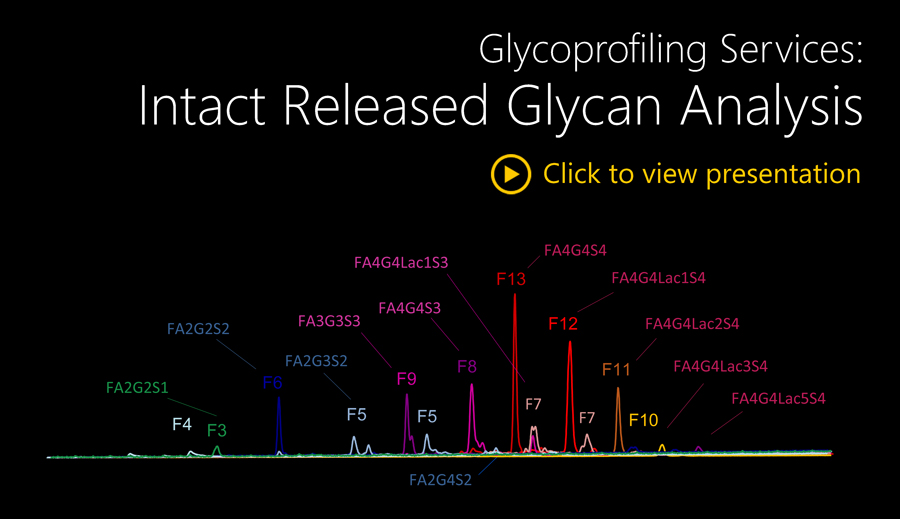 This module provides WAX-HPLC charge profiles with the relative proportion of the mono-, di-, tri- and tetra-sialylated glycan structures. The analysis will be performed on single or triplicate releases of samples (typically 5-100 µg for each release), an equivalent amount (by volume) of sample buffer negative control, and alongside Ludger's system suitability standards, positive and negative controls.

This module is suitable for:

In order to gain more detailed information on the glycan structures and their relative proportions Level 2 Detailed Characterisation is required.

WAX-HPLC provides charge profiles for profile comparison between batches where glycan separation is based on glycan charge.

2 options for N-glycans profiling to choose between:

2 options for O-glycans profiling to choose between:

Please enquire for more details or a quote,
and if you wish to set up a confidentiality agreement
please contact Dr Radoslaw Kozak, Head of Glycoprofiling directly to arrange this.