A key component in a well-designed analytical strategy is the inclusion of standards.

Standards: i) help with characterisation, ii) allow quantitation, and iii) provide vital information on the performance of an analytical process.
Example: in a QbD framework, glycan standards that match the GCQAs which have been identified for optimised drug function can be used to ensure that the analytical methods chosen for characterisation provide the necessary data required to monitor the drug realisation process

The data acquired when using standards allow the analyst or reviewer to judge whether a specific stage in the process or the sample itself is in or out of specification.
Glycan standards are used for different applications during glycan analysis and can be broken down into four broad categories: system suitability standards, process standards, reference standards, and quantitative standards.

The Standards Table below shows which standards can be used for best practice during the analysis of sialic acids, monosaccharides, N-glycans and/or O-glycans.
These fall into the following categories; 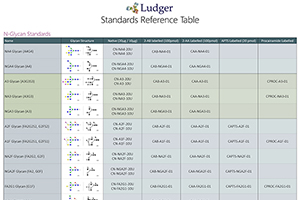 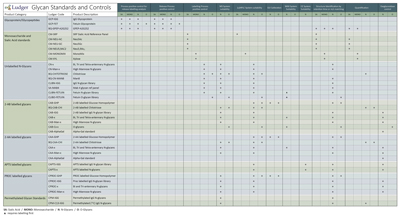 The N-glycans that are available are found in most biological and biopharmaceutical glycoproteins and can be grouped into the following categories: oligomannoses, and complex glycans that are fucosylated, sialylated, and di-,tri-and tetra-antennary. The glycans are available as molecules with a free reducing terminus (aldol), or chemically derivatized. The common chemical derivatives of N-glycans are fluorescently labelled glycosides (2-AA, 2-AB, APTS, procainamide, etc.), or permethylated glycans.

The O-linked glycans are linear or biantennary and contain an initial GalNAc residue. O-Glycans are grouped into eight core structures, however, the most common O-glycans generally belong to core 1 and 2. These glycans are provided with a free reducing terminus (aldol), or are derivatized as a fluorescently labelled glycoside. The fluorescent labels that are commonly used are 2-AA and 2-AB.

A Glucose Homopolymer (GHP) ladder can be used as an external calibration standard during the analysis of glycans by (U)HPLC. This standard gives a characteristic ladder profile from monomeric glucose to approximately 20-mers of glucose oligosaccharides. The elution position of each peak in this ladder is expressed as a glucose unit (GU) and is used to assign GU values to peaks in the released glycan pool by comparison. These GU values are reproducible and predictive as each monosaccharide in a glycan contributes a set increment to the GU value. This allows for primary assignment of structure by comparison of GU values for unknown glycans with glycan standards whose GU values are in databases or reported in the literature.

Glycoproteins are used as process controls for glycan release, and consecutive release followed by labelling. Glycoprotein standards that are widely available are IgG, mAbs and fetuin. These are useful during endoglycosidase release (N-glycans), hydrazinolysis, Orelea or beta elimination (generally O-glycans) and acid release (during monosaccharide/sialic acid analysis). Fetuin, IgG and mAbs can also be used as process controls for proteolytic digestion during glycopeptide mapping.

Glycopeptides are used as process controls for glycan release, and consecutive release followed by labelling. They are useful during both endoglycosidase release (N-glycans) and acid release (during monosaccharide/sialic acid analysis). They can also be used as purified standards during glycopeptide mapping.

Monosaccharides, such as hexoses, hexosamines and sialic acids, are suitable fluorescent labelling controls for their respective analyses.

Ludger has integrated BQ quantitative standards into many of our analytical processes for glycan analysis and has set acceptance criteria. This allows the analyst to judge the results and know if they are truly in or out-of-specification.